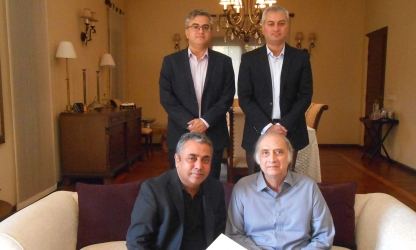 Rehmpack, a packaging printer in Pakistan, has invested in a Rapida 106 sheet-fed offset press from Koenig & Bauer for its new facility in the Port Qasim Industrial Area.

The press chosen by Rehmpack is a 7-color Rapida 106 in a double-coater configuration for UV and conventional printing. To date, Rehmpack has worked with 5- and 6-color sheet-fed presses with single in-line coating units. Further processing is handled on die-cutting and folding carton gluing machines, while narrow web flexo machinery serves a separate labeling division. Rehmpack also produces high quality PE films with its own extrusion line.

With its 11 printing and finishing units, this new investment will be the company’s first Rapida press.

Rehmpack director Atif Anis Barry said: ‘When making our decision, we paid particular attention to efficient, future-oriented technologies and high print quality. The choice is thus no surprise, since Koenig & Bauer is market leader in sheet-fed offset presses for packaging applications. The double coating process, furthermore, will help to expand the product portfolio in respect of high-quality finishing.’

Rehmpack first entered the packaging printing market some 45 years ago. A focus is placed on food packaging. The company is certified in accordance with key food safety regulations such as HACCP and ISO 22000. The list of customers today features brand names such as Procter & Gamble, GSK, Colgate-Palmolive, Mondelez, Coca-Cola, English Biscuits, Continental Biscuits and local companies.

Port Qasim Industrial Area is one of the two seaports of the city of Karachi. The 18,600 sqm (200,000 sq ft) facility is set to be operational with new, high-performance sheet-fed offset technology by mid-2018. 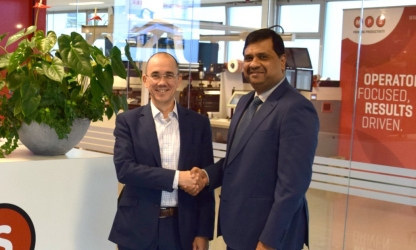 MPS has broadened its reach in South Asia with the appointment of Intercom Trade Services, a K-Group company, as its new local representative for Pakistan, effective December 1.

Intercom Trade Services, a part of K-Group, represents many European brands, particularly in the field of extrusion, printing and converting. With operations out of Karachi, Intercom has a team of sales and service professionals. Located in Karachi, K-Group began operations in 1997 and provides services in the field of chemicals, machinery, office automation and archiving.

MPS has identified Pakistan as a market with a lot of potential, as Eric Hoendervangers, MPS co-founder and commercial director, explained: ‘With highly populated cities like Karachi with over 21 million inhabitants, there is naturally a higher demand for consumer goods which require labels. We see K-Group offering a well-suited network to increase our market share in Pakistan.’

Pakistan: Cherat Packaging, a producer and supplier of packaging to the cement industry, and Austria’s Mondi have made over half-a-billion cement bags since 2002. The local bag manufacturer has a bag production capacity of 600m/yr. It holds country-specific exclusive rights to use Mondi’s brown sack kraft paper to produce cement bags and has bought only Mondi paper for its use in the last 15 years.

“The bags had to be suitable for rough handling and fast, dust-free filling, and we wanted to deliver further benefits, such as material and cost savings. Mondi’s Advantage Select paper was the perfect choice. The 80/85gsm variant has revolutionised paper bag sales in Asia as it has provided us as well as our customers with high quality, low cost solutions. It has allowed us to use two plies instead of three and to dispense with perforation, which has significantly reduced paper consumption and dust at our clients’ premises. The bags are lighter, yet stronger than the previous three-ply versions,” said Amer Faruque, the chief executive officer (CEO) of Cherat Packaging.

Packaging industry gets a boost after clampdown on loose eatables

FAISALABAD: The Punjab Food Authority (PFA) has opened new avenues for processing and packaging businesses by clamping down on the sale of loose eatables including spices, pulses, oil and other essentials, said PFA Director General Noorul Amin Mangal.

Speaking to members of the Faisalabad Chamber of Commerce and Industry (FCCI), he said substandard and adulterated food items had increased health care costs for the provincial government with the medical bill for needy segments of society exceeding Rs300 billion.

“It is due to the adulteration in food items that even young people are falling prey to heart diseases,” Mangal commented.
He said 90% of diseases were directly caused by the adulterated food and amongst these the most common was malnutrition in women and children. “Stunted growth has also been identified as a major cause of malnutrition.”

Mangal emphasisied that PFA had taken proactive steps to encourage the sale of fortified flour, oil and salt to overcome malnutrition. PFA intended to re-organise the food industry on well-defined scientific lines by strictly adhering to the globally recognised standards, he clarified.

“PFA has forced manufacturers of margarine, so-called energy drinks and frozen desserts to clearly print on wrappers that these are not milk, fruit juices, cheese, ice cream or butter,” he said.

“This step will discourage the import of unhealthy food items and support our own livestock and agricultural sector to capture the domestic food market in addition to paving the way for export of original products.”

He announced that the sale of open milk would be banned which would help to promote the packaged food industry. Similarly, a Punjab-wide association of big cattle farmers will be encouraged to protect their fundamental business interests.

He voiced hope that the steps taken by PFA would bring a qualitative improvement in the health of the young generation, which would also ease the burden on public sector hospitals.

Responding to a question, he revealed that the process of issuing food licences would be outsourced and in that connection, the first batch of 120 food licence consultants would qualify on December 30, 2017.

“We have also recruited 125 interns for the second batch who will provide consultancy services for food industries throughout Pakistan,” he added.

FCCI President Shabbir Hussain Chawla appreciated the steps taken by PFA and demanded that the chamber be given due representation in the newly created Punjab Food Board.

He said PFA should also prepare comprehensive standard operating procedures for food safety which should be publicised widely for awareness of the quarters concerned.

He called for setting up food testing labs at the tehsil level for the expeditious testing of food samples in addition to mobile testing facilities.

As most of the eatables are currently sold by cart-driven vendors, standard operating procedures should also be chalked out for them so that they could be regulated in the sale of pure food items, he said.