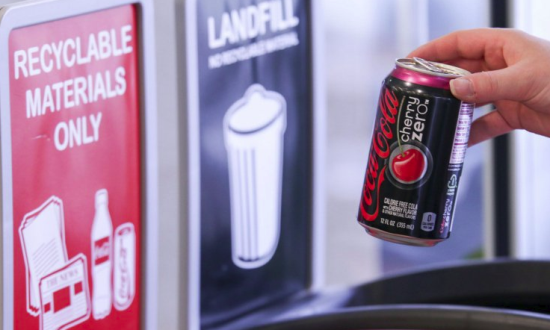 Coca-Cola has announced it is to ‘fundamentally reshape’ its approach to packaging and recycling.

The world’s largest soft drink company said its global goal is to help collect and recycle the equivalent of 100% of its packaging by 2030.

It is thought to produce over 110 billion single use plastic bottles each year – which are also thought to contribute to marine and ocean litter.

“The world has a packaging problem – and, like all companies, we have a responsibility to help solve it,” said James Quincey, president and chief executive of The Coca-Cola Company. “Through our World Without Waste vision, we are investing in our planet and our packaging to help make this problem a thing of the past.”

The Company and its bottling partners are pursuing several key goals:

“Bottles and cans shouldn’t harm our planet, and a litter-free world is possible,” added Quincey. “Companies like ours must be leaders. Consumers around the world care about our planet, and they want and expect companies to take action. That’s exactly what we’re going to do, and we invite others to join us on this critical journey.”

The plan has been criticised by some groups, arguing it does not go far enough.

Greenpeace UK said it failed to include any reduction of the company’s rapidly increasing use of single-use plastic bottles globally.

Louise Edge, senior oceans campaigner for Greenpeace UK, said: “Coca Cola is trying to offset its huge plastic footprint by investing in a bit more recycling. China’s refusal to accept more plastic waste, and the resulting backlog in plastic exporting nations, shows that we can’t recycle our way out of this mess while we continue to make the mess bigger.

“As the most recognizable brand in the world, and the biggest plastic bottle producer, Coca-Cola has a special responsibility to lead the way in reduction of single-use plastic. Its plan is full of band-aids and will do very little in the way of making a meaningful impact on the amount of plastic entering our waterways and food chain.”